As you place your order at the drive-thru intercom at the Starbucks at 71st and Shadeland, you directly face, across the parking lot, one of the newest businesses to join our community, Champlin Jiu-Jitsu Academy.

Drew Champlin, a Brazilian jiu-jitsu black belt, held his grand opening on January 2 of this year, celebrating it with several students who followed him from any one of the three gyms that he previously coached at. Many others, including youth and a few IMPD officers, have joined in just a matter of weeks. With a background in exercise science, Drew himself began training about ten years ago and has been coaching for nearly six years. He prides himself in being “all-in” with the sport and the jiu-jitsu community.

As a resident of Devonshire VIII, Drew’s priority was for the 71st/Binford area to be the home of his academy. While dining one afternoon last fall on the patio at La Hacienda, he happened to notice across the parking lot a “For Lease” sign on a store window, and that was that. He says that he appreciates the safe feel of the densely-residential area and the highly-trafficked nature of the plaza that sits on Binford.

Drew appreciates that the desire to defend oneself is usually what gets a person interested in jiu-jitsu training. As he describes, it truly is the most applicable self-defense training because students feel the struggle of both persons going 100% on the mat, as opposed to “fighting” a stationary punching bag at the gym. But then, he says, along with excelling at a new skill set and knowing the satisfaction that comes with pinning someone, people actually stay for the community that is built on a strong foundation of trust, a natural byproduct of sparring with a partner.

Jiu-jitsu is also a terrific workout, as one would expect, without feeling like a workout. Grappling provides plenty of movement and increases the heart rate, but Drew would argue that it also provides something deeper (and more fun): an outlet for our natural desire to horse around. Any parent who has a rowdy child can attest to our ingrained desire to roughhouse and be physical, and jiu-jitsu is unique in that it is able to recall that fun in adulthood and give it a productive outlet.

If you have children who are in the midst of roughhousing at home, yes, Champlin does offer courses for youth. He holds a class for ages 5-8 where kids learn the basic techniques along with how to follow directions, stay in order, cooperate with others, and graciously win and lose. The class for ages 9-14 is similar to adult training, focusing more on skills and techniques until a student is prepared and able to take on an adult. 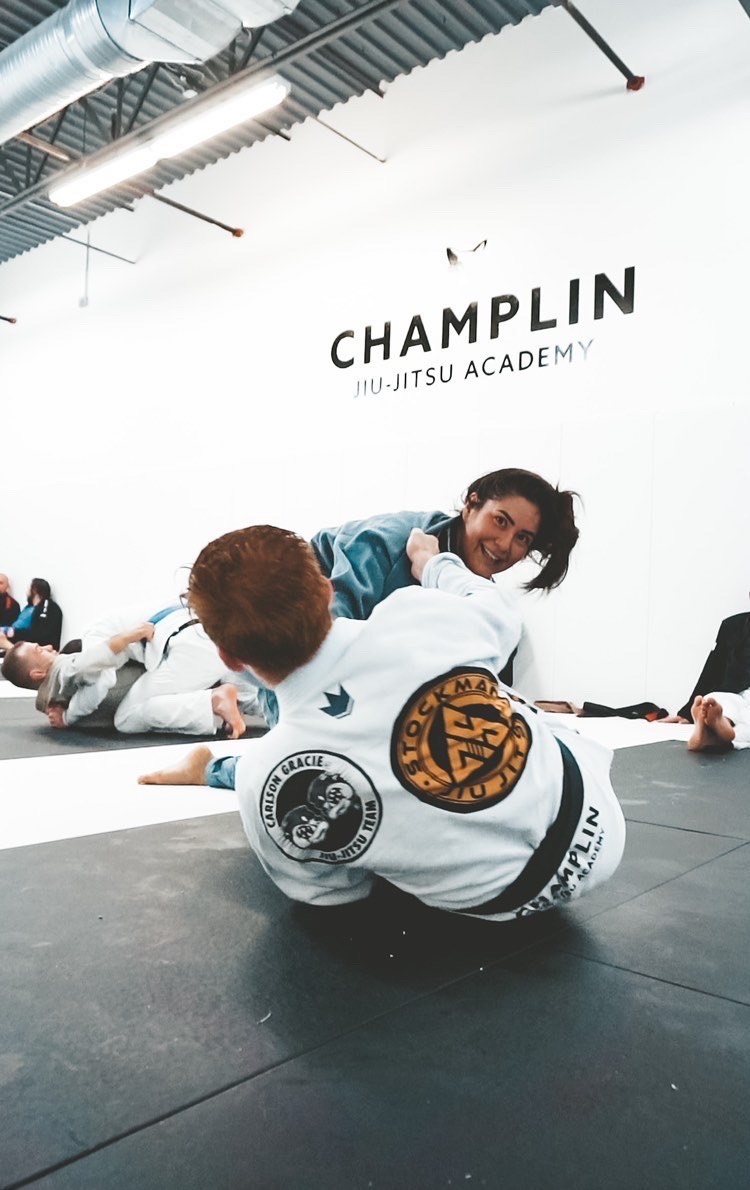 For adults, there is something going on at Champlin seven days a week, crescendoing with a Sunday afternoon open-mat style class where there is no instruction but 100% sparring. Youth are coached on Tuesday and Thursday evenings, and private instruction is also available. A full schedule can be found on the academy’s website.

A week-long free trial is offered at Champlin for those who are curious to find out what jiu-jitsu training is about. During the free trial, Gis (the martial arts term for uniforms) are provided and the only thing you need to do is show up!

Drew offers discounts for military and first responders, as well as a discount for multiple members of a household.