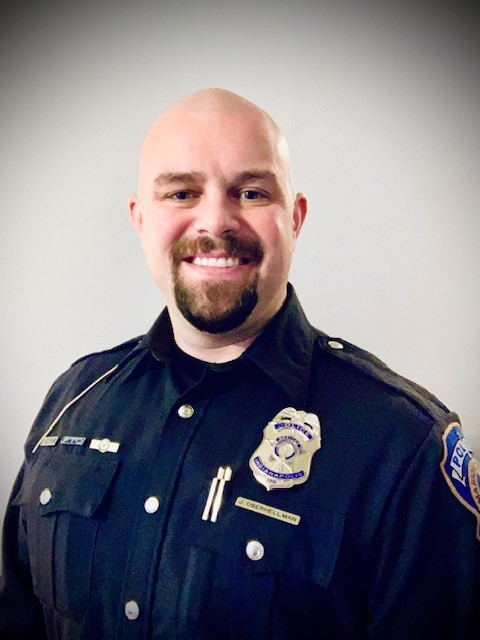 How long have you been on North District? What roles have you held, and what roles do you see yourself doing in the future?

I entered the IMPD Academy in December of 2016 and have been working on North District ever since completing field training at the beginning of 2018. I primarily work as a beat officer responding to calls for service and actively patrolling my assigned beat, but occasionally I also work specialty details such as traffic enforcement, and the Broad Ripple Entertainment Zone riding patrol bicycles in the warmer months. I’ve served on IMPD’s Event Response Group (crowd control specialty unit) for approximately 2 years and very much enjoy interacting with citizens and doing my part to keep them safe while they attend large events in the city. I’m certified as a Crisis Intervention officer, which means I am trained to respond to mental illness-related calls for service. But the most rewarding and enjoyable role in which I serve is being a Field Training Officer (FTO), which means I train, coach, and mentor new recruits one-on-one in the field when they complete their academy training. My recruit and I respond to calls for service together, after which I provide them with critique of their performance, and help them to cultivate and sharpen their skills, and develop the confidence required to perform as a solo
officer.

There’s nothing quite like the satisfaction of a successful apprehension of a serious criminal. It’s always a wonderful feeling to return to a victim and be able to say “we got’em!” and seeing the look of relief and gratitude on a victim’s face when rightful and just consequences come to those who wronged them. The worst part of the job is putting all the effort into making good apprehensions, conducting thorough investigations, and writing solid reports only to have prosecutors offer shockingly generous plea deals that allow criminals who could’ve easily been convicted of serious felony crimes to be released back into society with simple misdemeanor convictions, all because of a desire to expedite the process and avoid going to trial.

I wish the average citizen could understand how vast the scope of responsibility society has come to expect from their police. Not only are we expected to be crime fighters and crime stoppers, but we’re also expected to be marriage counselors when we respond to non-criminal domestic disputes. We’re expected to be parental counselors when we’re responding to parents at their wits end calling about their disrespectful and disobedient children. We’re expected to be mental health experts whenever we respond to disturbances involving people with mental-illnesses. We’re expected to be civil arbiters when neighbors get into non-criminal disputes with one another that they can’t seem to resolve on their own. I often explain to my recruit trainees that there are many different hats we must wear in our line of work and we are constantly taking off one hat to put on another throughout the course of a single day’s work, which can, at times, be overwhelming and exhausting.

As far as restaurants are concerned, Chile Verde at 75th and Shadeland has always been so kind and generous to us when we’re on duty. They’ve always given us top-notch service and I’ve never had a bad meal there. For special occasions, my family and I highly recommend Izakaya up on 96th St near the Sam’s Club.

The most important strategies for neighborhood safety are the tactics you’re already practicing – knowing your neighbors and watching out for one another, maintaining situational awareness regarding suspicious behaviors, and establishing a neighborhood watch program. There’s a reason that most of the neighborhoods in the area have a relatively low crime-rate, and that’s because you all have very active neighborhood watch programs. In addition to that, I think one of the most practical and helpful tools is home security systems equipped with cameras. Home surveillance technology has vastly improved over the past few years, and with several companies competing in this market, prices for home security systems that include surveillance cameras are more affordable and the systems are easier to install than ever before. When crimes occur, the most important factor that determines a case’s solvability is whether or not the detectives have any leads on possible suspects. The more cameras we have in our neighborhoods keeping watch over our properties, the better our chances are of generating investigative leads in the event that a crime occurs, which can hopefully lead to a suspect being identified, apprehended, and prosecuted. If you’ve not invested in a home security system that includes cameras that can monitor your property, I would highly recommend considering such an investment.

When I’m practicing good self-discipline, I enjoy anything that’s rich in protein, low in carbohydrates, and easy to grab and eat on the go, like the turkey jerky sticks. When I’m not as self-disciplined as I’d like to be (which is more often the case than the former), I enjoy the Rice Krispy treats and Ruffles Cheddar and Sour Cream flavored chips. (Perhaps we need to come up with some method of keeping the sugary snacks locked up, and they only become accessible after I’ve completed 200 pushups, or something of the sort.)