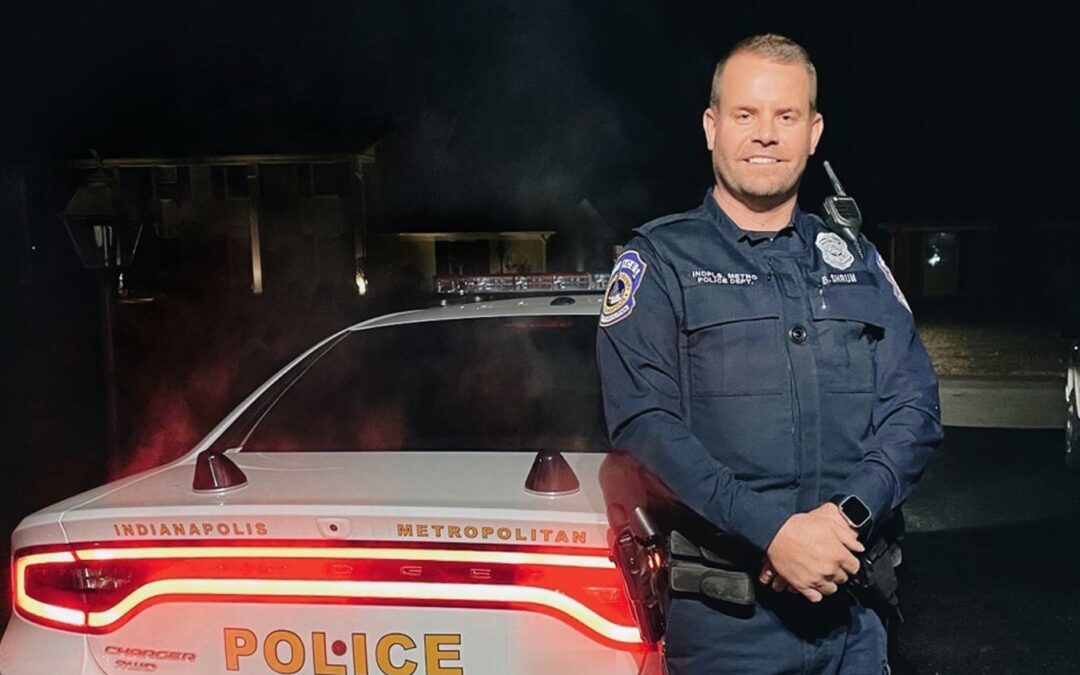 How long have you been on North? What roles have you held, and what roles do you see yourself doing in the future?

I have been on IMPD for just over 5 years now, and most of my experience has been up here in the North Shadeland/Castleton area. This is the District that I have lived in since even before becoming a police officer, and have always enjoyed the area. During Field Training in my probationary years, I was assigned this shift and have worked it since, for many years with these good officers. So far, I’ve really enjoyed my time working the street and, as of yet, don’t have aspirations to leave. I also work with the bike unit on special city-wide events.

As a kid, I always watched cheesy cop shows like Walker, Texas Ranger. I am, as a person, very justice-oriented, but really didn’t want to wear the “patrol uniform.” I found myself in an accounting office and hated it. I really needed to get out of the office where I could use my strengths and make a difference. I applied to IMPD at age 33, and have loved being a police officer ever since.

The best part of the job is working with good police officers and catching bad guys. I love that every work day isn’t the same, and that you encounter something new every shift. My partners and I are always evaluating police responses from other cities’ incidents and talking through them and how we would respond, or if it is applicable with Indiana Case Law.

The worst is two-fold.

One is the negative image that police officers get from either over-zealous media wanting to blame police, or trial by public opinion.

The other worst part would be not having a prosecutor prosecute serious crimes, crimes in which police officers jeopardize their safety to catch the bad guy. (example: carjacker, who fled from police, with a weapon, only got one year home detention)

Police Officers are humans, people, who see absolutely terrible things on a daily basis. From fatal car accidents to people and children shot. They’re called to the worst scenarios, with several adrenaline dumps per shift, and literally, hundreds of traumatic experiences through their career, whereas the normal person may have one or two their whole life. It wears on us. Being on this side of it, I now understand why the interactions I had with police, prior to me being an officer, occurred the way they did. Be gracious.

I love Chili Verde. Their enchiladas are delicious and they are very police friendly. I am also a big fan of Roots Burger Bar, where kids eat free on Sundays. As a father, that’s where you can usually find my family and me.

Honestly, the simple things count. Don’t leave valuables visible through car windows as easy targets. Know your neighbors, people who should or shouldn’t be in your neighborhood, and call IMPD if anything doesn’t seem right. Your first instinct is usually right and you’re feeling it for a reason. Don’t ignore it. In today’s technology, if you can, get door or house cameras. That helps out a lot.

My guilty pleasure is the Jalapeno-cheese White Castle sliders. I don’t have them too often, as I know they aren’t the healthiest. I am a regular consumer of the lime sparkling waters, and any frozen dinner meal is handy as most restaurants aren’t open during the late shift. Thanks for the support!