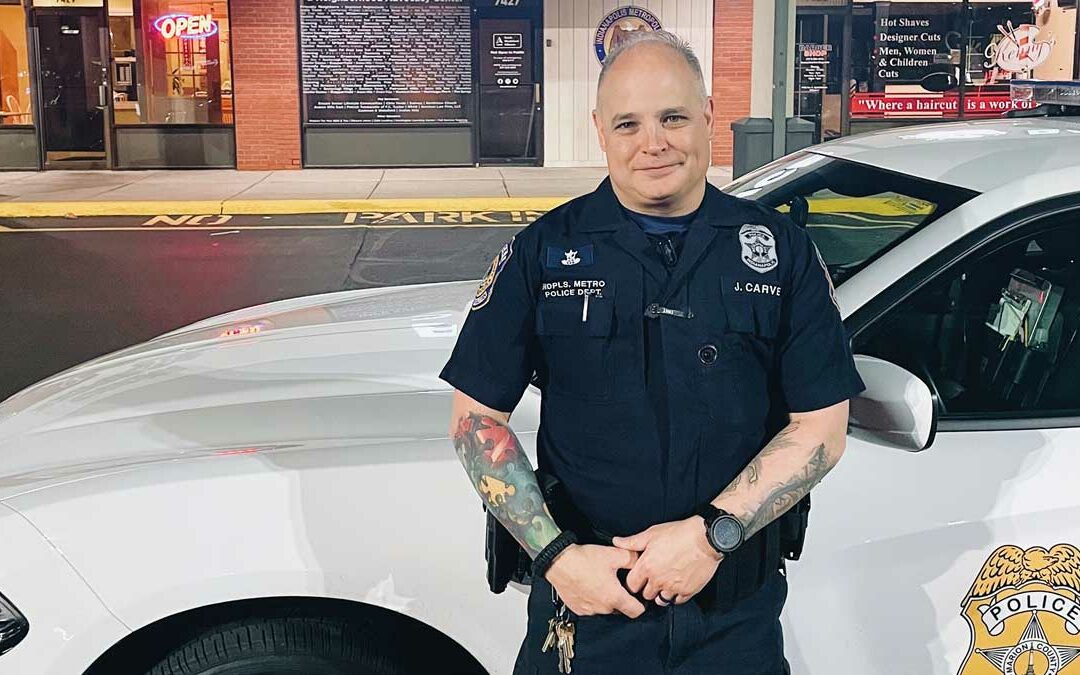 How long have you been on North District? What roles have you held, and what roles do you see yourself doing in the future?

I started my law enforcement career a little late in life; I was 31. I now have 20 years experience. I have been on North district since May 2017. Prior to North District I was with the Sex Crimes unit and I have been at other Detective units on Northwest District working in Street Intel and they past Burglary squad. I have several certifications and work with a few other units. Mainly I work in the IMPD ERG (Event Response Group) but I am also involved with IMPD RND (Radiological/Nuclear Detection).

I have a degree in Criminal Justice, which I earned that degree prior to it becoming the “IT” thing to do. I left Indiana and entered the USMC. I have always been involved in some form or other of service. I originally had applied to Fire Departments but eventually settled into Law Enforcement working for Miami County and then Grant County. I had even applied to the US Border Patrol and was accepted there as well. The acceptance packets for IPD and USBP came in on the same day. We, meaning my wife and I, finally decided on IPD.

The best thing about this career is being in the largest family on the planet. Everyone is a brother or sister. That means their families are part of the BIG family. So, their Husbands, their wives, and their children are ours. That’s definitely the best thing. It’s also part of the worst. A death in the family is the worst part. Whenever we lose a brother or sister it hurts. The death of a fellow officer is just like losing a family member, because they are part of your BIG family.

I wish people, even new officers or people considering law enforcement as a career would understand the stress that this job puts onto the human body. The average age at death for LEO’s is 66. Its constant stress because an officer is never truly off. It has been compared to being in combat, every day, all the time.

I love Chile Verde and also Chow Express. I just recently discovered Bibibop. That is becoming a favorite. One of my favorite places is Revved Up Tattoos. It’s a great little shop on Center Run. I have an ink collection going.

Lights and keep landscaping cut back. My time with the burglary squad really showed how lighting can help reduce crime in an area. Also watch out for your neighbors, especially the older neighbors. Check on them and see how they are doing. A great way to help with neighborhoods is to have neighborhood gatherings once or twice a year. Let people get to know each other. That has been lost over the years. Neighbors don’t get together like they used to. (Invite us LEO’s. We don’t bite and most of us like to eat).

I like to try to eat as healthy as possible so I really enjoy things baked, nuts like almonds especially if they are unsalted, water flavorings (MIO etc).